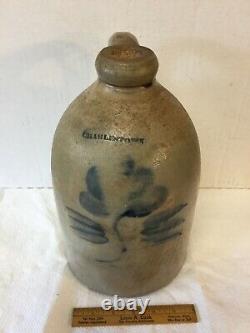 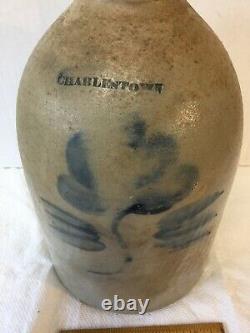 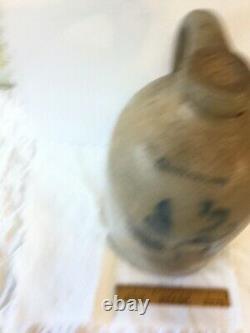 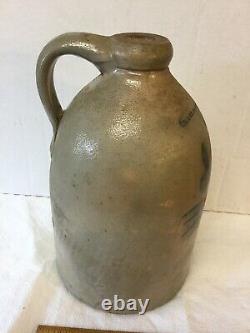 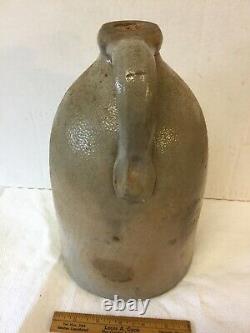 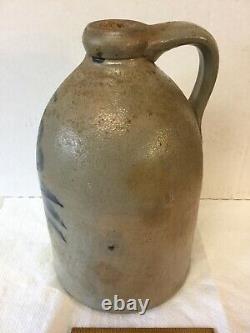 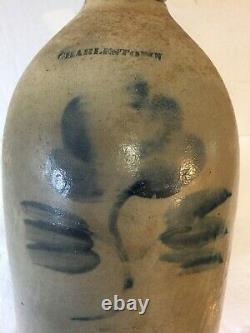 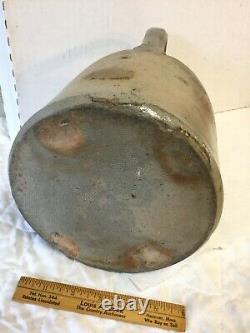 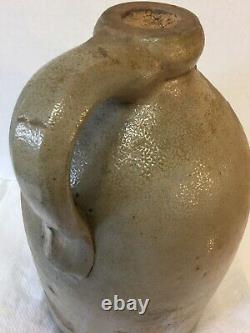 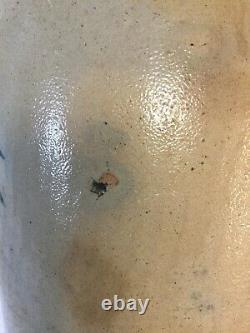 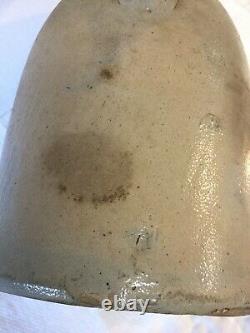 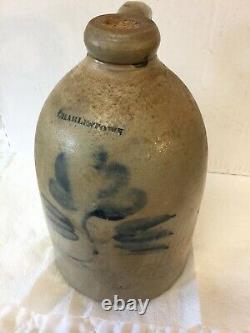 Antique Stoneware Jug Charlestown Mass with Cobalt Blue Flower Decoration. Incised "CHARLESTON" and these are generally attributed to being made by the stoneware company founded by Frederick Carpenter or the maker Edmands & Hooper.

Measures about 12" tall and base is 7" wide. Not marked with a umber, I assume it is a 1 gallon or possibly a 2 gallon size.

Very rare and desirable stoneware jug with a beautiful blue flower. The original cork is still in place inside the top!

I have been told based on this form it is post Carpenter era 1840's and was almost certainly made after 1827 they year Frederick died. So it is an early Charlestown piece for certain but made in the era after Frederick Carpenter. May have been made by the firm found by Edmands & Hooper. Some great information I found concerning Charlestown stoneware pottery. Edmands and Hooper Pottery Works.

For hundreds of years, Charlestown was famous for its pottery and the Edmands family was one of the most successful producers of stoneware. Charlestown was famous for its earthenware, dating back to the Provincial Period of the late 1600s. There were huge clay deposits in the area between Medford Street and the Mystic River and early potters used the clay from these pits to make their pots.

By the 18th Century, Charlestown was the heart of the pottery business there were upwards of 40 potters operating out of eight or nine shops near Austin Street. At the peak of its prosperity, in 1775, the town, with all its buildings including its pottery shops, were destroyed by fire. Although many potters never recovered, in 1812 Barnabas Edmands built a pottery on Austin Street where he began to make stoneware.

Researchers discovered that red ware was poisonous because of its lead content and Edmands was one of many trying to introduce stoneware as a better alternative. It was a harder ceramic; it burned at a higher temperature, did not leak and was safe to use. In 1850, Edmands and his family moved their pottery factory to a wharf on the Mystic River, toward the Neck.

There, they built large furnaces to replace their out-of-date kilns. Edmands' sons, Edward and Thomas continued the company as Edmands & Hopper Pottery Works and added the manufacture of drain pipe to the pottery line. The factory produced pottery on the banks of the Mystic River until 1905.

FREDERICK CARPENTER WORKED ALONG SIDE THE OWNERS SON, JONATHAN FENTON AT NEW HAVEN CONN. THE TWO YOUNG MEN, FENTON AND CARPENTER, JOURNEYED OUT ON THEIR OWN AS YOUNG MEN, BOTH EXTREMELY TALENTED AND WELL TRAINED IN MAKING STONEWARE. WITH SOME HELP FROM A FAMILY FRIEND, THE FUNDING WAS PROVIDED, AND THE TWO BUILT A POTTERY ON LYNN ST. THIS POTTERY THE LYNN ST.

POTTERY IS ONE OF THE EARLIEST AMERICAN, WELL DOCUMENTED CONSTRUCTION PROJECTS OF A POTTERY, FOR USE OF MAKING STONEWARE. THIS WAS AROUND THE YEAR 1793. FREDERICK CARPENTER WAS OF ENGLISH DECENT AND MADE HUGELY OVOID SHAPED FORMS AND USED OCHER OR FERRUGINOUS GLAZE TO DIP, NOT PAINT, HIS STONEWARE. HIS HANDLES SAT, LOOPED BRIEFLY ATOP THE UPPER SHOULDER ON JUGS AND HIS CROCKS WIDE AND OPEN IN A MORE DRASTIC OVOID FORM. THESE EARLY CARPENTER PIECES ARE UTILITARIAN AND LESS "CORRECT" BUT IN THAT PRIMITIVE LOOK, LIES GREAT BEAUTY.

SO, "SOMETHING FOR EVERYONE" WAS THE ADVERTISING FOR THE NEW POTTERY, AS THE TWO NEW PARTNERS COULD SERVICE MOST OF BOSTONS POPULATION THAT COULD RELATE TO ONE OR THE OTHERS WORK. YOU SEE, IN 1793 IN AMERICA EVERYONE WAS FROM SOMEWHERE. THE SOMEWHERES WERE IN EUROPE AND THE BRITISH AND GERMAN IMMIGRANTS MADE UP A HUGE PART OF THAT SOMEWHAT SEGREGATED BOSTONIAN POPULATION.

BOTH POTTERS MARKED THE STONEWARE WITH IDENTIFIABLE STAMPS WHICH READ "BOSTON", ALL CAPITAL LETTERS. THE LETTERS APPEAR TO BE TYPEFACE WHICH WERE UNUSED WORN LETTERS NO LONGER USEFUL FOR PRINTING ON PAPER BUT WELL SERVED FOR THIS APPLICATION. THEY WERE ACQUIRED MOST LIKELY FROM A LOCAL NEWSPAPER AND LOOK TO HAVE BEEN MOUNTED IN SOME MANNER TO MAKE A STAMP OF SORTS. SOMETIME JUST BEFORE THE TURN OF THE 19TH CENTURY, JUST A FEW SHORT YEARS AFTER THE START OF THE POTTERY AT LYNN ST. THE YOUNG PARTNERS BROKE THEIR PARTNERSHIP. WHY THIS OCCURRED, IS MOST LIKELY LOST IN HISTORY, BUT SPECULATION WAS, AT THE TIME, THAT FUNDING FROM THEIR BENEFACTOR HAD BEEN STRAINED TO THE POINT OF EXHAUSTION. THERE IS/WAS NO PROOF OF THAT, IT WAS JUST HEARSAY. CARPENTER THEN MOSTLY VANISHES FOR A FEW YEARS AND THERE IS NO CONFIRMED RECORD OF HIS WHEREABOUTS. CARPENTER THEN REAPPEARS IN THE RECORDS AT CHARLESTOWN, MASSACHUSETTS, A SECTION OF BOSTON, AS A POTTER IN 1801. HIS POTTERY AND KILN WERE LOCATED ON THE MYSTIC RIVER AND CARPENTER WORKS THERE FOR ABOUT TEN YEARS, TO ABOUT 1811.

THESE STONEWARE EXAMPLES ARE MARKED WITH "Boston" SHOWING A CAPITAL LETTER TO THE STAMP. IN 1812 FREDERICK CARPENTER GOES TO WORK FOR THE BARNABAS EDMANDS POTTERY IN CHARLESTOWN AS MASTER POTTER. IN HIS NEW ASSIGNMENT, HE MAKES STONEWARE WITH THE IMPRINT "CHARLESTOWN" ALL CAPITAL LETTERS. DURING THIS PERIOD, CARPENTER USED A SERIES OF INCISED FIGURAL STAMPS, AT TIMES TO ACCOMPANY THE CHARLESTOWN STAMP, WHICH INCLUDED, HEARTS, EAGLES, SHIELDS, STARS AND TASSLES.

THERE ARE SOME SEVENTEEN KNOWN STAMPS HE USED DURING HIS TIME AT EDMANDS. IN 1827, FREDERICK CARPENTER PASSED AWAY EARLY, LEAVING THE WORLD WITH A LIFETIME OF TREASURED STONEWARE. FOR MANY YEARS UP UNTIL THE 1950'S HIS WORK WENT ON UNDOCUMENTED AND UNDERVALUED.

THE RESEARCH OF CARPENTERS LIFE IS LARGELY DUE TO EFFORTS OF LURA WOODSIDE WATKINS AND HER FAMILY AND FRIENDS WHO DEDICATED MUCH EFFORT AND TIME TO THE TASK OF FINDING OUT WHO THIS PERSON WAS AND WHAT HE HAD ACHIEVED. TODAY FREDERICK CARPENTER STONEWARE IS REVERED BY COLLECTORS AND LOVED BY ALL WHO READ HIS STORY OF AMERICAN DETERMINATION. The item "Antique Stoneware Jug Charlestown Mass with Cobalt Flower 1840's Era Excellent" is in sale since Sunday, March 7, 2021. This item is in the category "Antiques\Decorative Arts\Ceramics & Porcelain\Crocks".

The seller is "spooknook" and is located in Weymouth, Massachusetts. This item can be shipped to United States.