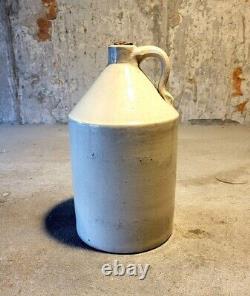 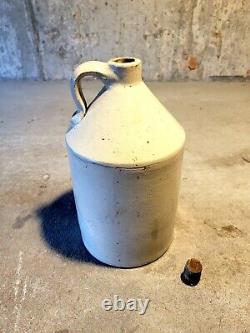 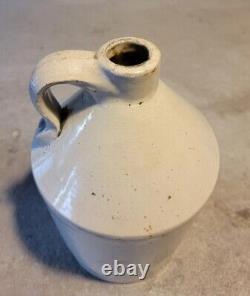 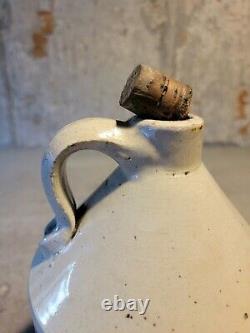 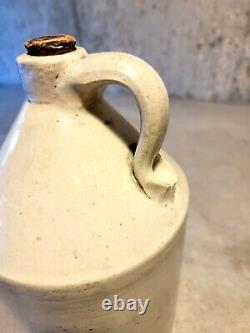 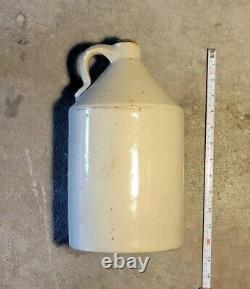 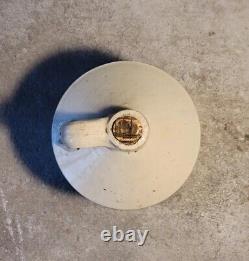 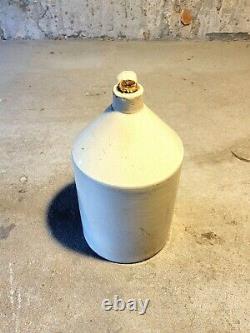 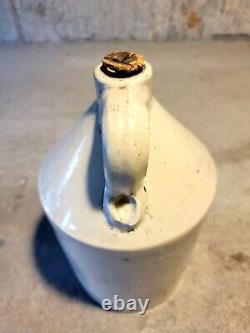 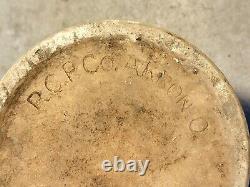 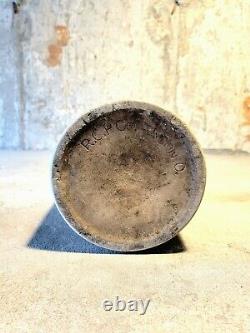 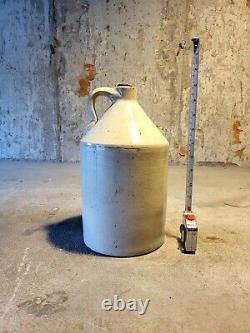 / Robinson Clay Product Co. Pioneer's or Frontiersman's Stoneware Moonshine Jug in Superb Mint Condition with Original Cork. Unlike nearly all 19th century ceramic whiskey jugs, this one made it through the ages without a single scar to prove it. It is completely free of the usual chips, cracks and missing chunks around the lip/mouth and base edge; its handle is complete and intact, with crisp, smooth edges all the way down the sides and around the flared end of the slab; its entire finish is present, with the desirable "orange peel" dimpled texture, and without cracks or lost flakes; and its base is similarly free of blemishes (aside from the normal, light scuffs / surface scrapes of a vessel that's spent time in active service), with the signature R.

Maker's mark scored bold and clear. There is a horizontal "refractory dunt" - as my professional potter friend called it - where the shoulder and body meet on the right side, if facing the front of the jug.

She explained that this is a normal result of the firing process on antique factory-made ceramics, and is not considered a blemish or fault. The cork is complete and in good shape, but is the only part of this offering that did seem to bear some effects of age, drying out a bit as cork does over time - yet it still fits snugly. Everything described above is visible in the photos, which I encourage you to study closely as they form an integral part of the description. If you'd like to see more photos of anything in particular, please don't hesitate to ask. And the same goes for questions: Please reach out, as I want to ensure that you receive exactly what you expect.

This pristine stoneware settler's jug also comes with an oral history. And I suppose, through the words you're reading now, I've given it an official written history, too.

According to the daughter, her father acquired this moonshine jug from the original owner's grandson in the 1950s or'60s. This man, the grandson, wasn't a collector himself - at least not intentionally - outside of his own family's heirlooms and keepsakes. But these were noteworthy enough to attract plenty of interest over the years, first from the local history and antiques circles, then institutions and societies all over the country, and even a few beyond its borders, not long afterwards.

Some of these artifacts now reside in museums, she told me, or have at least spent time in them. They've been deemed so noteworthy and important because the grandfather - the original owner - was one of the few pioneers to make his way out west, settle (here in Utah), and preserve most of his stock of provisions from the long journey.

Apparently he made his fortune fairly quickly and was thus in a position to save his gear and tuck it away, being prescient enough to know the items would be historically significant relics of an important part of the country's youth. So he entrusted this lot to his grandson, who, as an old man, was the late, most recent owner's neighbor, when he himself was a young man. The young man was fascinated with the old grandson and his many stories and artifacts, and the two spent a great amount of time together and were good friends before long. As the grandson was approaching the end of his life, he bequeathed the treasures to the late collector - sparking his love for old things of importance and turning him into the lifelong collector he would become. Now, I haven't confirmed any of this.

I can't, without investing a crazy amount of time and resources. This is all just what I was told. But I know when my leg's being pulled, and that woman - the daughter - believed what she was telling me.

As far as she knows, it's true. However, I did check a few historic details to see if they lined up with the story. First, I asked the daughter if she knew what year the frontiersman and original owner began his trek out west, and she knew this passed-down history well enough to fire the answer right back: 1859.

I don't need to research anything to know 1859 is consistent with the years settlers were making the westward push to seek their dreams and take over the land. I cracked the digital books to find out when RCP Robinson Clay Product Co.

Was in operation, and they officially began producing goods under that name in 1856. Then there's the presence of the O. That immediately struck me as a good clue, because surely Ohio couldn't be abbreviated as such after Oklahoma and Oregon became states.

Oklahoma wasn't much help - surprisingly late to gain statehood in 1907. But Oregon was born surprisingly early, in February, 1859 - that same year our settler set out for the west.

Of course, it probably took people some time to adapt, and the pioneer probably obtained many things for his kit well before he embarked. But I checked another record as well - the US Postal Service's (then the Post Office Department) official state abbreviation updates and the years they were published - and by Post Office regulations, Ohio could no longer be represented by the single O. As of their updated list in 1874 (these were very infrequent, with the previous one published in 1831 and the next not appearing until 1943).

So, to bring this long writing to a close, here's what I believe we can reckon about the age of the jug: Even if the story passed from the grandson to the collector to his daughter is inaccurate, it seems that we can at least logically conclude that it was manufactured by the 1870s, and quite likely not later than the early 1860s. Either way, it's old!

I believe that story, though, and the daughter's confident certainty in that year. I believe that by 1859, this jug was already in the world, on its way across the continent to a place not far from where it sits in my storeroom today. Thank you for your shared interest! This item is in the category "Antiques\Primitives". The seller is "esmccauley" and is located in this country: US.

This item can be shipped worldwide.
largewesternglazehamiltonwhiteantiquechurnadvertisinggallonflowerdecorationglazedhandlesbluedesignbird19thyorkcrocksaltrareovoidwaterstonewarebutterearlyprimitivewingvintagedecoratedpotteryfloralunionstingcobalt